Driving Digital at the Speed of Expectation

Home » Blog » Driving Digital at the Speed of Expectation 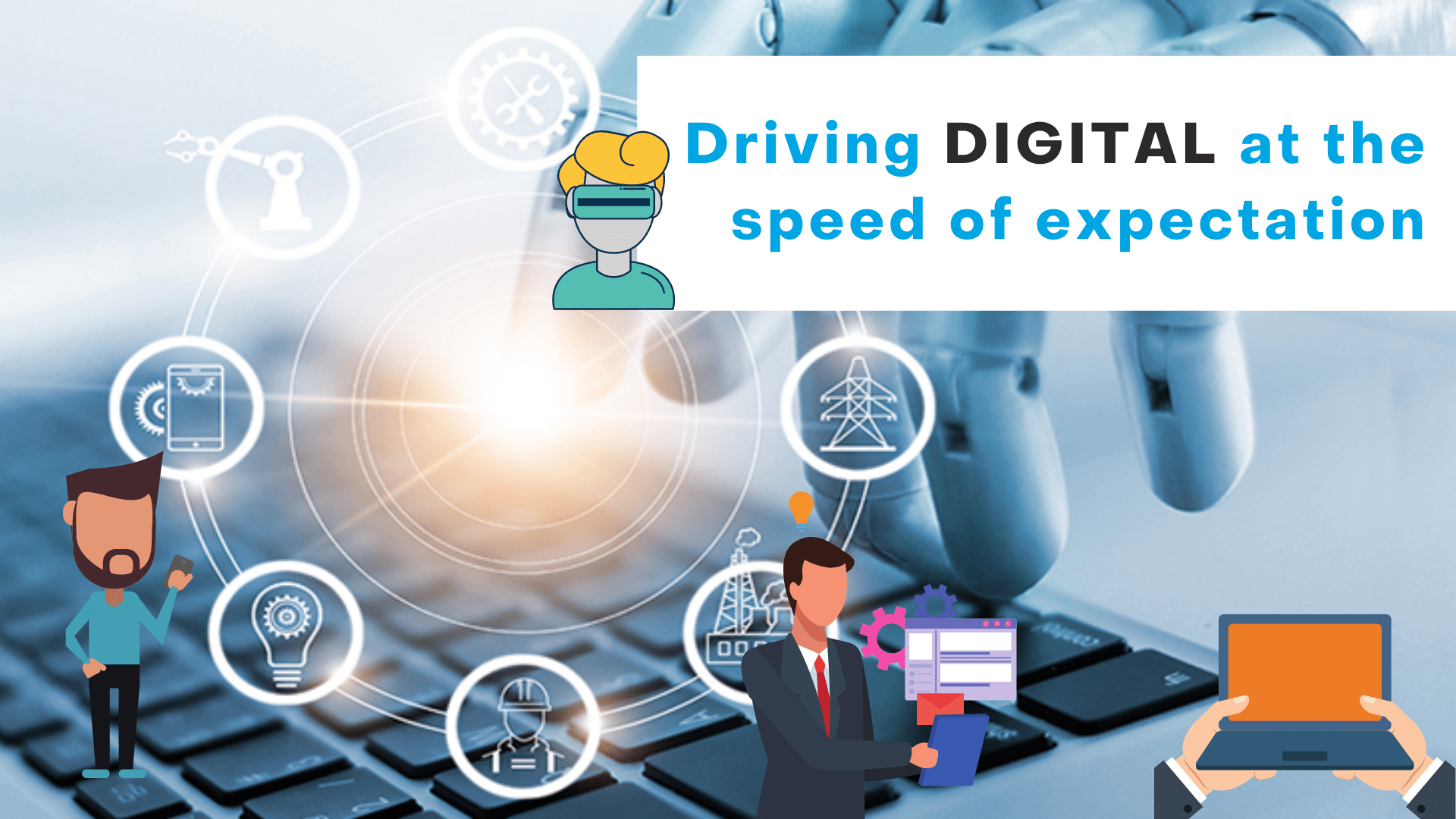 Ever wonder why the term “digital” has become one of the biggest technology buzzwords? After all, we’ve had digital technology for over a half century, since the first commercially available computer correctly predicted that Eisenhower would win a landslide victory in the 1952 presidential election. Since then, we’ve been on a digital transformation journey that has fueled nearly every advancement in modern history.

So, why the renewed fascination with digital transformation?

To answer this, we must look beyond technology and understand the fundamental shift in consumer attitudes and behaviors that have accelerated technology adoption and given rise to a powerful new force: the speed of expectation. Only by understanding the consumer side of digital can we truly appreciate the groundbreaking implications of the digital economy and the tools, strategies and mindset required to lead it.

So, what exactly is “digital” anyway?

Unlike previous advancements where a singular invention, like electricity, brought about radical change, today’s digital revolution is characterized by a fusion of technologies that include social, mobile, cloud, internet of things (IoT), Artificial Intelligence (AI), Machine Learning (ML) and a slew of others. By themselves, these technologies are not revolutionary. But together, they have created a powerful set of force multipliers whose combined effect is creating a new reality to which every company must adapt.

The intersection of these four forces is the essence of present-day digital:

Pervasive connectivity – Through IoT and social technologies, people are more connected now. Not only are people connected to other people, but also to devices, and those devices are connected to each other.

Extensive mobility – Mobile has put the power of computing in our pockets, giving us the freedom to “plug in” from anywhere at any time. This enables a world that is always on and accessible.

Intelligent machines – Machines and software don’t have to rely on human programmers anymore. Instead, they use AI/ML to sift through massive datasets and learn to solve problems on their own.

While digital technology is disrupting the global economy, there’s another more subtle phenomenon happening behind the scenes with consumers. Every advancement throughout history, from the steam engine to the internet, has taken years to gain mass adoption and establish a lasting impact on society. It’s hard to imagine now, but electricity took 46 years before it became the primary source of power. After centuries of technology advancing ahead of human capability, consumers have finally caught up and are now demanding better experiences.

Be careful when the belt is in motion

This cycle of continuous disruption is reminiscent of an episode of I Love Lucy in which Lucy and Ethel were tasked with wrapping candy on a fast-moving conveyor belt. At first, the pace was manageable. But as the belt sped up, the women became overwhelmed and resorted to stuffing candy in their mouths. Fortunately for Lucy and Ethel, the factory foreman intervened to turn off the belt. The cycle of digital innovation, however, has no such safety valve. Companies not only have to contend with developing better user experiences, but they must do it at the speed of expectation.

Half a century later, the digital revolution is still going strong. Today, the technology is vastly different — smarter, faster, more accessible and connected. But more disruptive than the technology itself is the unrelenting pace of innovation and the consumer adoption and empowerment accompanying it. Viewing digital transformation through this customer-focused lens, perhaps the essence of digital is more appropriately reduced to just one sentence: Your company is becoming digital if it is able to continuously deliver better customer experiences at the speed of expectation.

Notice there’s no mention of technology. Instead, the focus is on creating value continuously at a pace that aligns with consumer expectations. Technology plays an important role, but to be effective it must be matched with adjustments in organizational mindset, competency and agility.

Consider each component of this definition:

Continuous delivery can’t be achieved without an iterative development model with short deployment cycles measured in weeks — not months and years. This requires revamping organizational skills and adopting new processes for resource allocation and funding.

Better customer experience can’t be delivered using only the narrow lens of surveys and focus groups to gather insights. Companies must learn to use the social web to engage customers in co-creation activities that cultivate mutual value and earn trust. This too requires unique competencies that must be developed or acquired.

Operating at the speed of expectation requires an agile computing environment that can scale and pivot quickly. It also requires a flatter organization to expedite decision making and push it closer to where value is created and captured.

In all these examples, it’s clear digital’s disruptive forces present more of a challenge in adapting mindset than adopting new tools. Using digital-age tools with an industrial-age mindset may provide short-term gains, but won’t lead to better customer experiences that endure.

Technology will always come and go. What is here to stay is the giant leap in speed and agility required to succeed in a customer-centric economy.