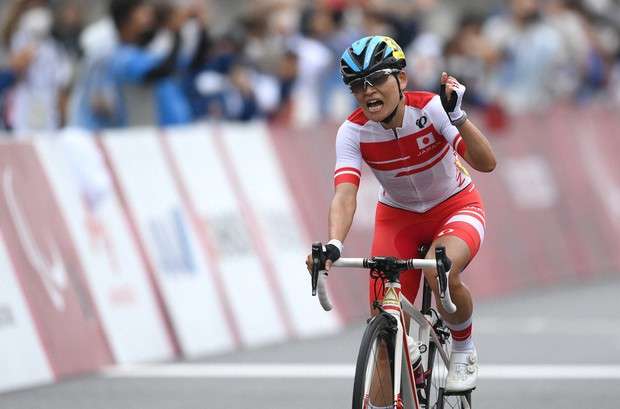 Sugiura clocked 25 minutes, 55.76 seconds at Fuji International Speedway to triumph and rewrite the age record previously held by Takio Ushikubo, who was 46 when he won judo’s 71-kilogram division at the 1996 Atlanta Games.

She also became the first female Japanese cyclist to win gold at the Paralympics and the fourth overall.

Sugiura has paralysis on the right side of her body and memory impairment suffered after a fall in a cycling race when she was 45 years old.

Sugiura will bid for her second Paralympic gold in the road race on Friday.

In other events, visually impaired athlete Shinya Wada of Japan won the Paralympic silver medal Tuesday in the men’s T11 1,500 meters at the National Stadium.

The Osaka Prefecture native was diagnosed with retinitis pigmentosa while he was in high school and lost his vision completely when he was a university student.

Japan’s Kenya Karasawa, who won silver in the men’s T11 5,000-meter event in his Paralympic debut in Tokyo, crossed fourth.